How to get un-sampled Google Analytics data with python (& without)

Learn how to work with data

Un-sampled Google analytics data, wherever you need it.

Eventually in your marketing career you might find yourself working a website, where it's so large that Google analytics becomes difficult to use without sampling.

They also might not have shelled out the hundreds of thousands a year for premium, to get around it.

What can we possibly do?

We're going to explore all the messy details, a couple different options and then go through some python we can use to get all of it. I use this script/library a lot.

What is Google analytics sampling

When you have too much data, Google analytics won't return all of it. In the case below it's only using 52% of our data to make the reports. It's because we have over 500K sessions in our date range.

It's tried to pick a representative sample so we still get an answer, but without Google having to do a huge amount of work & taking forever.

Problem is that sometimes sampling can throw your data off really badly.

We'd far prefer our analysis was right and it just took a little longer.

Even worse there are multiple kinds of sampling.

Eugh I know. The worst.

Cardinality is the second kind of sampling.

Lets suppose you have a website with 6 million pages. When you open a report GA won't show all of those 6 million pages. Instead you'll see a smaller number of pages and everything below a cut off gets put into (other). 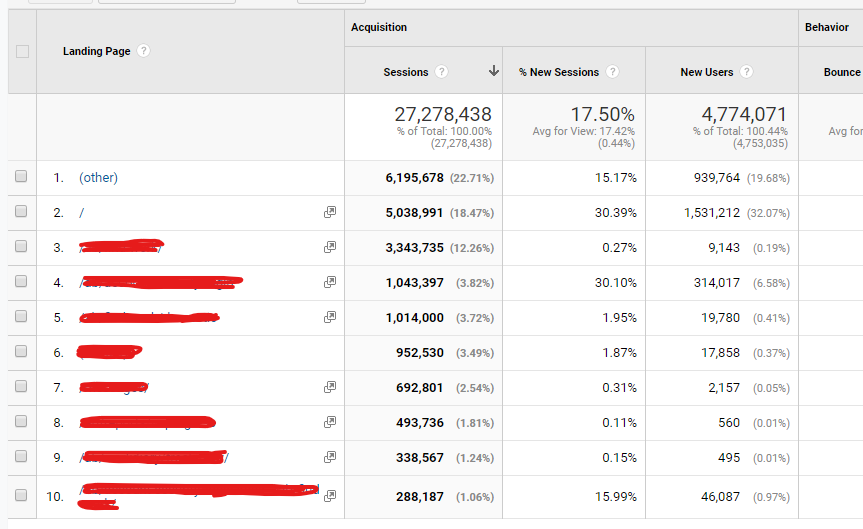 Specifically if you use a default table (i.e. one that you get to by clicking on a link in the interface) and it has more than 50,000 unique rows per day then any rows after 50,000 will all be bundled up into (other).

In practice you'll usually find that if you have more than 100K rows for a time period some of them will be rolled into (other), because no websites top pages totally change from one day to another.

You are technically getting all the metrics (your total sessions will be correct etc.), but you're losing the dimensions (extra pages are being rolled up into one), so we're calling it sampling.

I've actually simplified this slightly, cardinality is more complicated than that. I've put more information in the last section if you're unbearably curious.

When does Google analytics sample?

Did that make no sense? Don't worry let's dive into the details.

When you ask for data with Google analytics there are two kinds of queries it makes:

Any standard report (I.e. one you can click to in the interface) GA is pre-aggerated. E.g.

Google has calculated it before you ask for it, so it can return the answer quickly.

But as soon as you ask for any customisation e.g. a Custom report or adding a secondary dimension, then Google can't use it's pre-calculated reports and it goes to the raw data.

Queries off the raw data

How can we get around sampling & cardinality?

How to get around cardinality

Cardinality is often an issue when you have a user generated template which can generate vast numbers, e.g. job adverts or user profiles.

If you're working in advance

The most common way to get around this to: 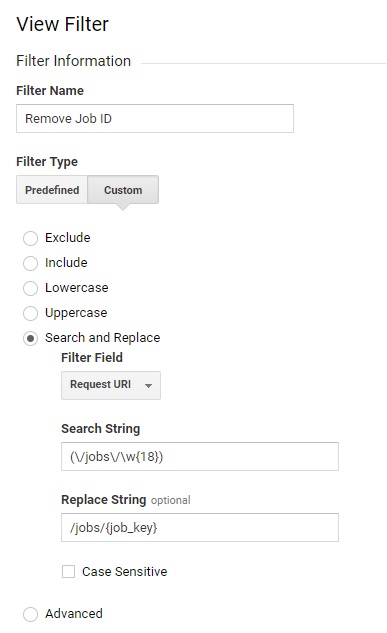 This won't get you historic data, but it does usually solve the problem going forward.

If you're working with already saved data

Adding in a secondary dimension will create sampling, but remove cardinality and allow you to hit 1 million rows. That might solve your problem.

How can we get around sampling?

Shell out all the dollars and un-sampled data is yours. You'll be able to download un-sampled reports and everything will be good.

Only use the pre-aggregated reports for big time periods

If you can restrict yourself to only pre-aggregated reports, then this problem goes away.

But lets be honest. We probably won't do that.

Rather than downloading data for an entire date period, we split it into groups.

You can have an intern run this report for every week and then combine then together. You could do some cool stuff with Google Analytics Sheets plugin.

But we'd quite like our interns to be learning rather than wasting time with pointless reports. So how about some python so we can do it all in one click?

I've published a module that will download the data day by day. That means we can download up to 15 million sessions a month.

How to set up some python to download unsampled GA data.

Past Dom coming in clutch. I've already written how to setup python.

We could be joining it with crawl data, getting it for a long period of time for a large website, trying to avoid cardinality or any number of things.

We need to install the python library: daily-google-analytics-v3.

I've written about how to install python modules here.

Head to our git repo for daily ga data.

We then need to extract the notebook from the zip into just a normal folder. I do that with WinRAR.

Not sure what jupyter notebook is or how to use it?

Don't worry past Dom has us again. I wrote a guide for getting started with jupyter notebooks.

We want to find the notebook we just downloaded and run it.

We're then going to need to turn on the API to use it.

Then we need to create a project. There should be prompt. I usually call it something like "Local Data Analysis". You shouldn't need to set-up billing.

Then we go to the API screen.

And ask to turn on APIs.

Store it somewhere safe and copy the path to that location.

An API key is sort of like a password and if we're using the Google analytics API ourselves, we're going to need one.

We're going to go back to API menu button and select credentials which should give us this screen. 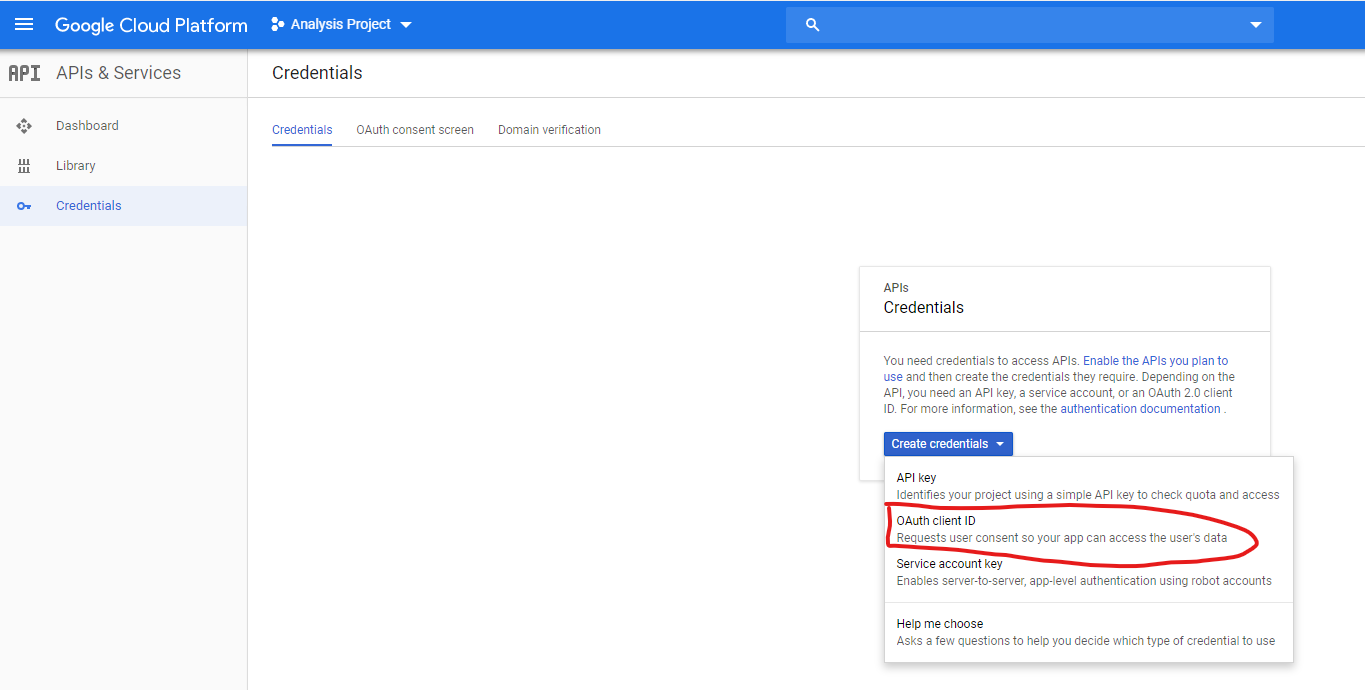 So open the OAuth consent screen. Set a name and save. 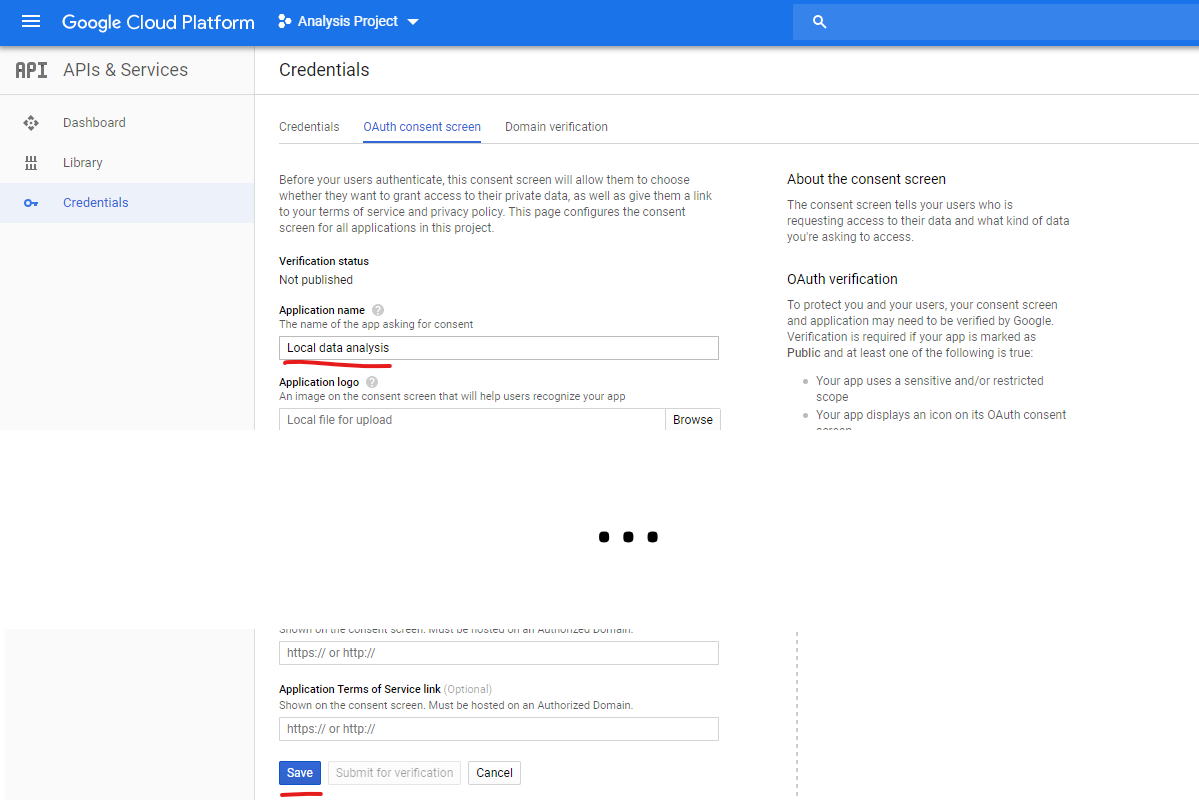 Then we can go back to the first screen and create one. Select "Other" and choose a name.

I usually put the purpose I'm using it for, plus the computer/computers I'll use it on. 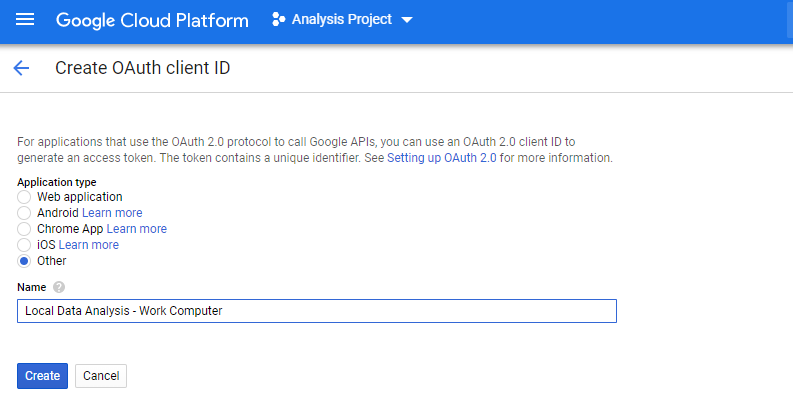 Then we'll get this prompt, which we'll just OK without doing anything. 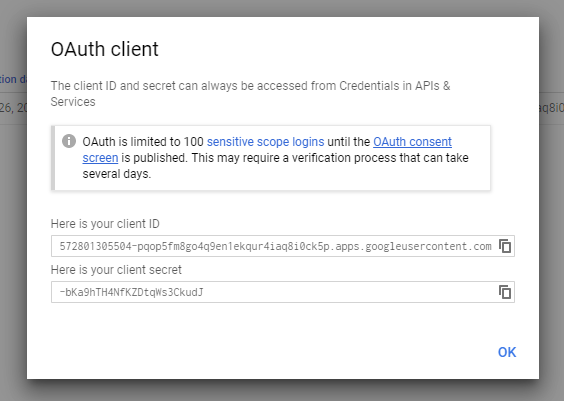 Put this somewhere sensible because we'll need to reference it in our code!

Now jump back to our Jupyter notebook and we're going to need to customise a couple things.

The notebook has all these instructions in, so now you can follow along there.

If you're interested in the code, see the Github.

Initially Duncan Morris (Founder & Chairman of Distilled and all-round excellent guy), put this together as a CLI tool years ago.

In the intervening years I ruined his beautiful code to fit my own workflows, while I was learning to code and finally got around to publishing it.

I would not use it in production. It is however useful to analysis.

I wanted to know all the extra details about cardinality

Hello curious person. You want too much detail?

If we're talking about raw queries, you get 1 million rows and that's it.

If we're talking about pre-aggregated tables then it gets a little fiddly:

If you want even

And we're off to the races! We've got GA data and lots of it.

If you've got any issues, post them in comments and I'll do my best to get you sorted with everything.

By Dominic Woodman. This bio is mostly here because it looked good in mock-ups.